There I was driving by a random exit on my journey

When you sent me a message of the Essenes

Time was that golden light

North star presenting itself to me

In my visions-La Magdalena, Mother Light

Compassion for the traumatized

The whole spectrum of light

Reverberating in my mind

The world shrunk down

time is that drop of rain

that rolls slowly down your car window

making its way to where the glass meets the rubber edge

changing course when a heavier droplet consumes it

to its random destination

where all those isolated dribbles

seven letters have at last risen

so much meaning squeezed inside

the E, the sound you make standing after you’ve fallen in a heap

another E, this time it hurts because of

the R, rough and capsized love

the S, the s…well the s is soothing as it slips

off of your tongue and out of your soulful lips

Lay down gently while

You are lead through the process

Blind to what you reconcile

If you stop to touch 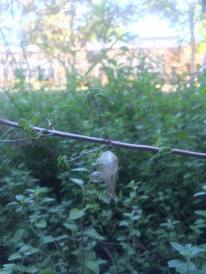 In the backpocket of my mind I keep

When the casualties of the outside world

Air that is 10 degrees cooler

After hundreds of days in the hundreds

My own sense of humor

Making me laugh in the presence of no one in particular

One hundred percent of those caterpillar rescues

The jet and coral magestic hues

Of a monarch unfolding itself, right before my very eyes

One hundred percent of me living

In the blushes of the hushed sunrise

To fill with possibility

Even though you push away

I swing and sway

Yielding to the flow

Even though black is white

And wrong is right

The worlds around me

To guide my sight

Even though each fleeting choice

Has a livelong voice

That echoes from the past

A melody can transform anew

For one beat or two

“It doesn’t interest me if the story you are telling me is true. I want to know if you can disappoint another to be true to yourself. If you can bear the accusation of betrayal and not betray your own soul. If you can be faithless and therefore trustworthy.”– from The Invitation by Oriah

What makes you smile?

Not one of those fake, necessary smiles

Rather, one of those no-strings-attached ones

Something natural, of the earth

Something real that issues

What makes you see?

Not the black and white scenes on display

Rather, the full spectrum of prismatic hues

Something that cannot be portrayed

By anyone else but you

Under the brilliant stars

I could feel a presence

It was my own voice

All the grime hidden

On my favorite skirt

Where you cannot get your money back

Even when the machine is broken

Your clothes all soaked in

And the cycle goes on

And the cycle goes on

But tomorrow is another day