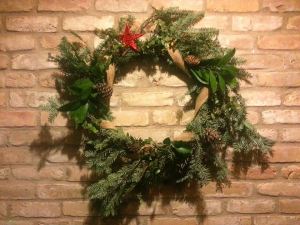 Yesterday was a special day for me because it marked the end of a journey with my daughter.  A friend of mine spontaneously invited me to make a wreath with her. She is very creative and talented (I know this because I know her beautiful children, who are also quite clever and innovative).  After this journey with Ava, I am saying yes to many experiences that I have perhaps passed over before because I was “too busy”.  Now I am not too busy.  Now I say “yes”.  Because you never know.

My phone battery died when I arrived at Erin’s house and as luck would have it, they are an i-phone family and I couldn’t plug in my android phone.  So I really had an opportunity to disconnect.  Erin and I leisurely collected evergreen branches, berries, rosemary and other items as she patiently showed me how to make a wreath.  We spent two good hours outside in her backyard as the sun began to set.  It was very peaceful and relaxing to be outside creating an ancient symbol of eternal life and hope.

When I arrived home, I was so tired.  I had spent a very relaxing time at Erin’s, but I felt tired and I felt the need to be alone and to rest.  So I said goodnight to my family early and went to my room and meditated for all of the people I knew suffering in the world.  The people in my microcosm and the people in the big world in general.  And I slept, and slept, and slept.  I awoke this morning feeling restored and released.

Today, I found out that yesterday was a special day for a boy I had not met a few posts ago.  It marked the end of a journey for him, as well.  In between that post and this one, I met him.  I met his father.  And Ava and I took him a dinner on Monday night.  Ava made him a card and I bought him some exquisite European chocolate that I’m not sure he was even able to taste before the end of his journey. There are probably a thousand rational explanations for why I felt a sense of exhaustion and relief.  But, I believe we are all connected deeper than we think to one another.  And I believe that I felt Jackson saying his good-bye to me.  And I think I was making that wreath in honor of him.

I am a teacher, Master Reiki Practitioner, published author and thinker. View all posts by Carmen Gray

1 thought on “For Jackson”